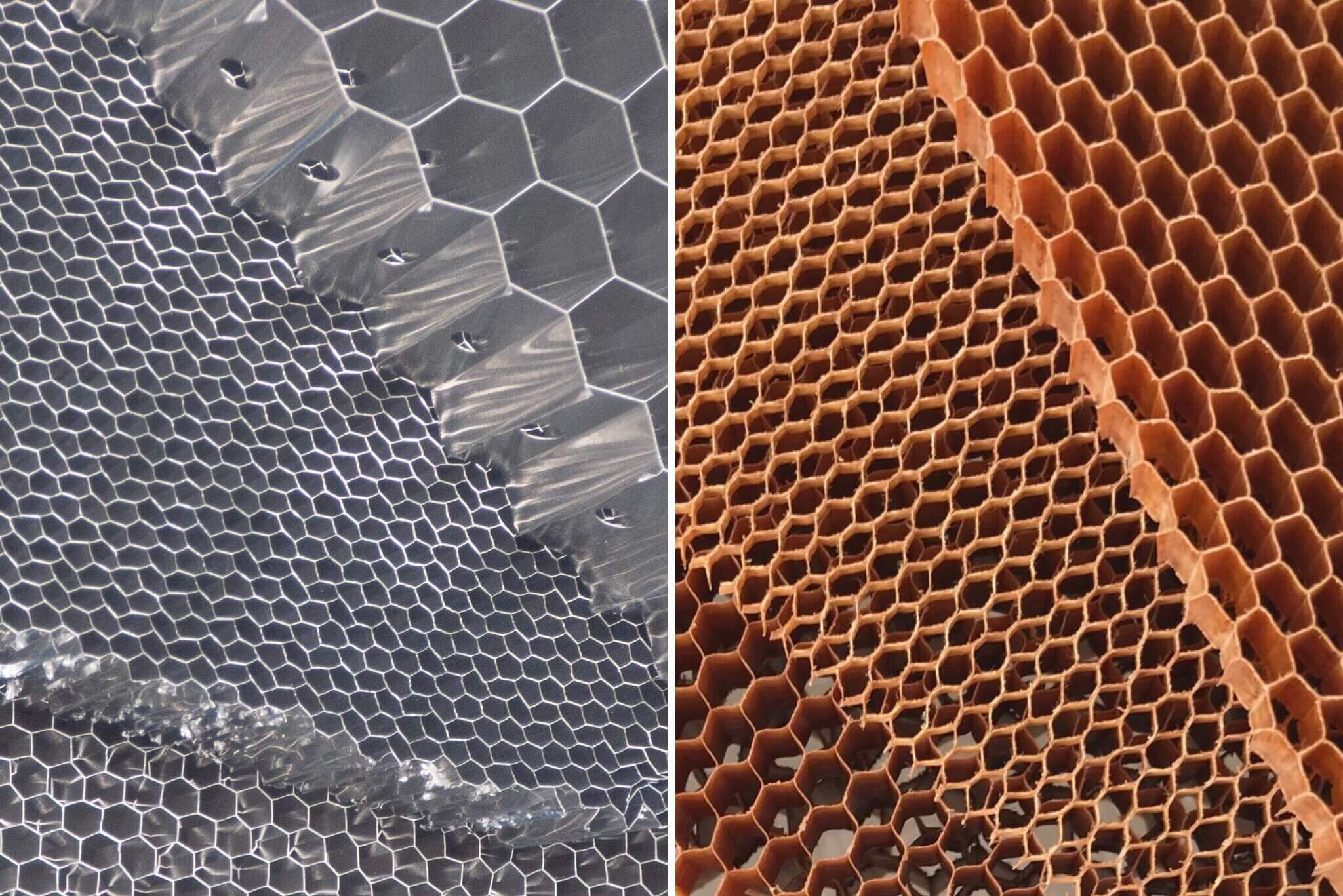 Aluminium is naturally occurring and was discovered in the 1800s; it was not produced as foil until the 1900s, when a Swiss manufacturer realised that aluminium foil could be used as a protective barrier and would be suitable for packaging. From the 1940s Britain developed aluminium bonding technology for aircraft construction with the Americans developing the ‘sandwich’ formation using an aluminium honeycomb structure within the panels for their aircraft. Since then aluminium honeycomb has been used in panels for construction, rail, automotive and marine applications. The main advantages of aluminium honeycomb are:

Scientists have continued to improve the strength-to-weight ratio of materials for high performance applications; man-made composites have been developed to meet market needs and improve on the capabilities of naturally occurring materials.

Nomex® was developed by the American chemical and pharmaceutical giant, DuPont in the 1960s, in their search for a nylon fibre which would have thermal resistant properties and would not melt, drip, or support combustion in air. This revolutionary flame-resistant meta-aramid material was ideal for fire-resistant clothing for emergency personnel and adopted worldwide. When exposed to extreme heat the fibres react and their properties change, heat is captured in the fabric giving the wearer extra seconds of protection from the heat transfer. Nomex® is used by firefighters; military pilots and combat vehicle crew; industrial workers at risk from flash fire and electrical arc hazards; racing drivers and even protected Neil Armstrong on his maiden voyage to the moon! It is available in paper, felt, fabric and fibre form.

Nomex® fibres are also used for electrical insulation by motor, generator, transformer and other electrical manufacturers in a variety of industries including asphalt and cement plants, chemical and steel factories.

In honeycomb form, both types are available in industrial and aerospace grades.

Nomex® honeycomb paper is used for lightweight structural support and helps improve the performance of vehicles which incorporate it, especially aircraft and racing cars. Like aluminium honeycomb it has a high strength to weight ratio and corrosion, fungus and mould resistant but has the added benefits of:
• Flame retardancy
• Good thermal insulation
• Formable for 3-D shapes

Aluminium honeycomb vs Nomex® – Which to use, when?

Nomex® is slightly more costly than aluminium honeycomb, so is generally used where the increased thermal resistance and formability advantage are required. These increased costs are mainly due to a slightly more complicated manufacturing process, higher wastage and more costly certification that is required especially for the aerospace grades.

Both types of honeycomb share similar properties but each one has its speciality; Nomex® is 20% lighter than aluminium honeycomb and can be fitted more easily to 3D shapes and curved surfaces. It can also be formed, moulded, stabilized and spliced to other Nomex slices of different cell sizes to create different strengths solutions. Aluminium honeycomb has greater strength and rigidity and is therefore more suitable for areas which may sustain impact or require energy absorption. Corex Honeycomb also manufacture flexible aluminium honeycomb, SuperFlex, to accommodate curved surfaces and 3D shapes.

A mixture of both types of honeycomb are used sometimes, depending on the specific performance required. For example, in a Formula 1 car the nose cone and chassis would have aluminium honeycomb due to its impact resistance; the body panels and fin would use Nomex®, due to the very low weight advantage.

Nomex® honeycomb can be found in aircraft parts such wings, doors, flooring panels, interior walls and helicopter blades and tail booms; it is also used in the construction of boats to help provide buoyancy that enhances speed. The Nomex® honeycomb material is typically sandwiched between two layers of carbon fibre sheet or a similar material.

Aluminium and Nomex® honeycomb are suitable for many applications and Corex Honeycomb supplies both types. Speak to our sales team to find out which is more suitable for your requirements.