The Monocoque Chassis in Formula One 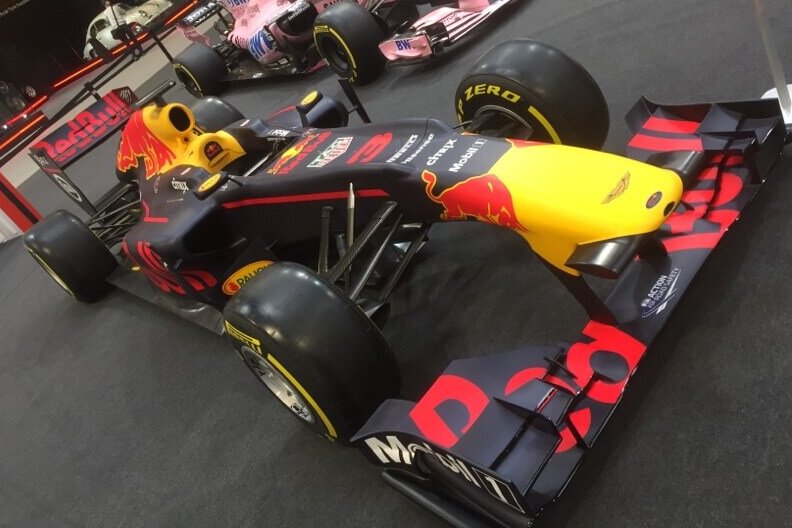 Formula One (F1) is the world’s most famous motor racing sport, with around 10% of the world’s population following the races and teams.

There are 10 constructors and 20 drivers who take part in each race. The constructors are Mercedes, Ferrari, Red Bull, Alfa Romeo, Mclaren, Hass, Renault, Toro Rosso, Racing Point and Williams, each have 2 drivers racing for them. Each season sees driver changes and new rules and regulations come into play. These changes are to make the racing as fresh and competitive as possible, and exciting for spectators, whilst keeping the safety standards as high as possible. Last years major change was the introduction of the Halo device to increase driver safety.

This year they include:

There are 21 races in the 2019 schedule with the season running from mid-March and running into December for the first time; the Chinese Grand Prix in April with mark the 1000th race to take place.

A Formula One car is a single-seat, open cockpit, open-wheel racing car with substantial front and rear wings, and an engine positioned behind the driver. The regulations governing the cars are unique to the championship. The Formula One regulations specify that cars must be constructed by the racing teams themselves, though the design and manufacture can be outsourced.

The monocoque or shell is a construction which uses the external skin to support most of the load, so the chassis is integral with the body of the vehicle. The monocoque chassis provides safety to the driver in extreme situations and must therefore be almost indestructible. Safety is of the upmost importance in the racing world, and has improved at an incredible rate in recent years; research and development in this area is continual and has the highest priority.

The journey to the modern-day Formula One monocoque started in the early 1980s with the use of carbon fibre composite materials for chassis manufacture. This composite material is twice as strong as steel but five times lighter; up to 12 layers are used, each with individual threads which are five times thinner than human hair.

According to the anticipated loads on varying areas of the structure, fabrics with differing weave patterns and in varying orientations are applied. A layer of aluminium honeycomb is then inserted between these mats, which increases the rigidity of the monocoque chassis without increasing the weight significantly. It also has impact resistant properties and is non-combustible which offers further protection to the driver. The whole shell is then heated in the autoclave, a giant oven and under negative pressure. As a result, the monocoques are strong enough to protect the drivers even in the most serious of accidents. A monocoque can weigh as little as 35 kg (5.5 stone) and still absorb very large impacts.

The FIA (the governing body of Motorsport) have very high safety standards and constantly raise the standards expected from the vehicles. Since 1985 they have specified crash tests for the monocoque chassis and for other parts of the car, which have become increasingly stringent. To protect the driver’s legs at the front of the car, the FIA imposed a rule that the first inside layer must be made from Kevlar, an extremely strong synthetic fibre, which is highly resistant to penetration forces. It is used on the body and tyres of Formula One cars and also in the driver’s helmets. It can be made into a honeycomb structure and inter-layered as a composite. Nomex, another synthetic fibre can also be used in its honeycomb form for lightweight structural support in the car as it has flame resistant properties and will not melt, drip or support combustion in air.

Each constructor varies the design of their car to gain a competitive advantage, to maximise its speed and performance. Aerodynamics has become a key to success, with great investment in research and development in this field. Each Formula One car is a work of engineering excellence, created by a hand-picked team of engineers and craftsmen and women. The essence of Formula One is to provide the ultimate challenge for man and machine on the track!

Corex Honeycomb has been a manufacturer of aluminium honeycomb for over 30 years and can now also offer our customers Nomex and Kevlar aramid paper honeycomb. Contact us if you require our products for your automotive projects.